To err is human, to win a big Mega Millions jackpot is divine. But because of a human error during the Tuesday, May 10 Mega Millions drawing, some prize winners have had to wait due to the subsequent temporary suspension of payouts.

In a goof that could happen to any of us, either the lottery’s drawing host John Crow or the person manning the teleprompter misread the Mega Ball number. So Crow called it as 6 instead of as 9.  The incorrectly called 6 also appeared on the screen.

A similar mix up of 6 and 9 is precisely how Ross Geller ended up sitting at the children’s table at Monica and Chandler’s wedding reception on “Friends.”

Fret not Missouri gamblers, ultimately, no one won the big $86 million jackpot on tap that night — with the incorrect 6 or the accurate 9.

The spin on what happened with Mega Millions

During the Mega Millions drawing, the balls spun in the chamber as usual and the first five numbers — 15, 19, 20, 61, and 70 —all got called correctly. Then last, as always, came the gold Mega Ball. The line underneath meant to differentiate the 6 and the 9 didn’t help this time.

On the Mega Millions youtube channel, the video for that day now has this message embedded in it:

“On May 10, 2022, the host of the Mega Millions drawing incorrectly called the Mega Ball a 6 instead of a 9. The 9 ball was drawn into the chamber and is the official result. The results of the drawing were audited by Preston CPA. We apologize for the confusion.”

One winner in Massachusetts and one in Virginia each won $1 million for matching all five white balls. Five other prizes can result from having a Mega Ball number: 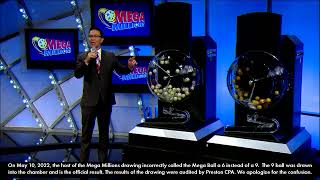 Some New Yorkers got paid based on the incorrect Mega Ball number. The New York Lottery said on its website that:

“Due to human error relating to the May 10, 2022 Mega Millions draw, the New York Lottery paid a total of $5,538 to players who presented tickets with the incorrect winning number to retailers before approximately 10 a.m. on May 11.”

The site went on to say that payments were “automatically recouped via a Lottery account for uncashed tickets.” It added that the mix-up did not affect on education or taxpayer funds.

Powerball doesn’t have superpowers, either

Powerball’s had its glitches in the past, too. In the US, previous Powerball snafus have also delayed payouts for a bit. A system outage caused this for a June 29, 2021 drawing.

Then, at the debut of Monday night Powerball drawings on August 23, an hour’s delay caused results to go uncertified until Wednesday.

Forty-five states plus the District of Columbia and the US Virgin Islands sell Mega Millions tickets. The Mega Millions website puts a ticketholder’s chances of winning the big jackpot at just one in 302,575,350.

After the May 10 Mega Millions snafu, the next Mega Millions drawing on Friday, May 13 offered a grand prize jackpot of $99 million (which nobody won). Seemingly unfazed by Tuesday’s mishap, Crow cheerfully called out his standard catchphrase at the end, “Play on, America!”

Crow, who has professional acting credits, started in lottery hosting by doing the number calling for the Georgia Lottery. And his background as a part-time stand-up comedian probably prepared him for shaking off nights that don’t go so well.